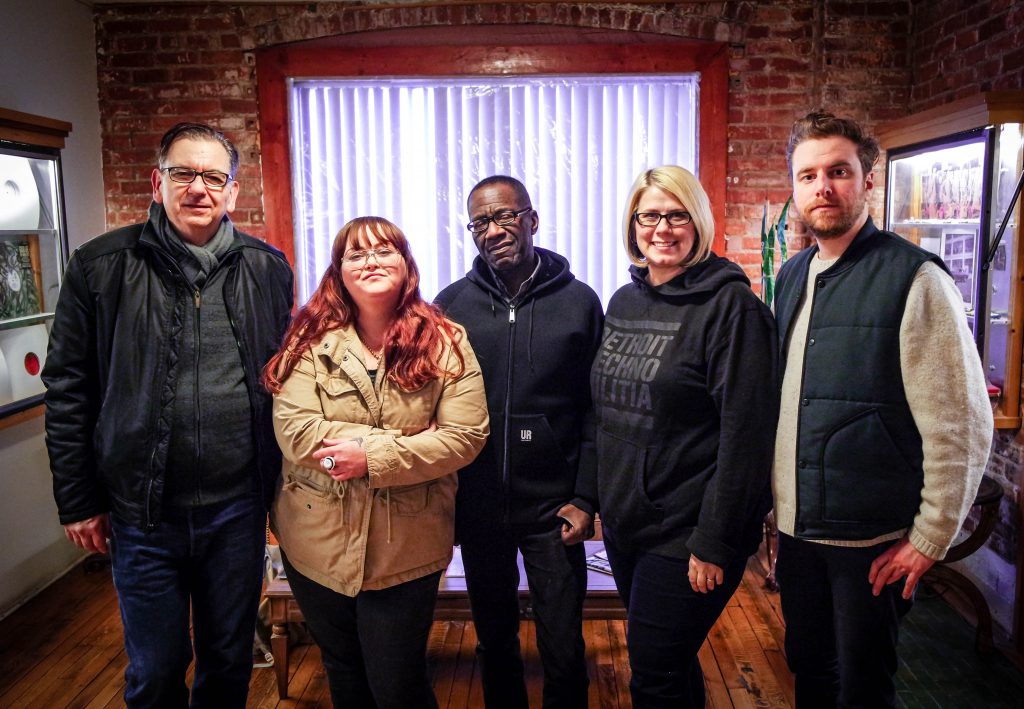 It began with a Skype call in late 2013 between Detroit writer Walter Wasacz and Berlin entrepreneur Dimitri Hegemann. The interview was for a story in XLR8R magazine on the resurgence of Tresor, the label, club and globally recognized techno brand that was inspired by what came before it in Detroit.

But the conversation took a turn about midway through the call. After talking about how techno culture and business helped stimulate Berlin’s (and Europe’s) night industries and creative economies the dialogue shifted to how it could do much the same for Detroit.

A few months later Hegemann came to Detroit for a series of meetings with Wasacz and old friends from the Underground Resistance (UR) collective. The Detroit Berlin Connection (DBC) was unofficially born that winter, its initial goal to intensify already existing relationships between artists in both cities – begun when Hegemann met Jeff Mills and Mike Banks of UR shortly before and after the fall of the Berlin Wall.

Detroit techno became the soundtrack for reunification, the heart and soul of a social revolution that helped build and sustain community life through electronic dance music. People spoke the same language on the dance floor: that is, none. Simply non-verbal expressions of love and friendship were enough.

The project uses this history of trans-Atlantic love and friendship to assist in community growth in Detroit through art, music, food, and proposed affordable lodging and community-focused development. Part of the Detroit-Berlin Connection’s mission is to establish Detroit as a creative lighthouse and a platform for artistic experimentation for the young and creative. But it is open to all comers, of all ages and backgrounds.

“What we did in Berlin became the most important cultural movement and economic force in Europe over the past 25 years,” Hegemann says. “The strategic use of art and alternative culture for redevelopment and revitalization has reshaped Berlin. We made it simple, something that everyone could understand. And the people came, and are still coming.’

Since the Berlin Wall came down in 1989 and political boundaries were redrawn, creative industries in the German capital have prospered, developing into the primary driver of economic growth. People from around the world come to Berlin to plug themselves into multiple creative energies in the city.

Contemporary Berlin was in part inspired by Detroit creative energy. Outsider tactics and strategies that helped make Berlin a world leader in creative industries can be directly linked to inspiration that Detroit techno brought with it over 25 years ago. The spirit of Detroit influenced the future of Berlin by providing a danceable soundtrack that helped heal a divided city after years of separation.

The DBC believes the circle of creative energy shared by the two cities remains intact, that both cities can continue to grow and learn from each other.

Berlin has shown that creativity attracts more creativity. It has proven it is best nurtured in social settings that don’t keep regular business hours.

On the contrary: there are no business hours to keep. It can be done whenever people choose to do it.

The DBC advocates for the vast potential of the night, beginning by changing the narrative that only bad things happen after dark. The story the group wants to tell is that the opposite is true: the seeds for the future are planted at night. Philosophers, novelists, filmmakers, painters, chefs, social entrepreneurs and innovators can and should use every hour of the day to work, create, produce.

That story includes opening up the night to more people. It is a welcoming, inclusive message: everyone can join. Dense, cooperative communities also prove to be safe and stable communities.

Detroit need not put up a closed sign when the sun goes down or stop bar service at 2 a.m. For the sake of creative industries inside a robust creative economy, the night must be free to go on without restriction.

The idea of a no curfew economy has neen a keynote topic at DBC conferences and workshops in Detroit and Berlin.

‘If Berlin stopped bar service at 2 a.m.’ Hegemann says, ‘Berlin’s economy would immediately collapse. Absolutely. It would not work.’

Techno tourism in Berlin is so important to civic leaders there that another industry of support as been established: to measure and analyze who is coming to Berlin to spend money each weekend, where they spend it, how much they spend and on what. The data is not surprising: an overwhelmingly number of young adult visitors from all over Europe and the rest of the world come for the night life, spending most of their money in clubs, on food and lodging, often staying in affordable hostels (there are over 30,000 hostel beds in Berlin).

The DBC has branded its most recent efforts The Potential, inviting presenters from Europe’s growing night economy and industry movement to speak at conferences and roundtables in both cities. The group has brought City of Detroit and community and business leaders into the conversation; they responded by coming to Berlin to see what is possible, to see first hand what could work here, and by joining in on local discussions.

Nearly five years of work has already been done. There is much more to do ahead. The foundation of the DBC has been built on ideas and vision converted into action in Berlin and elsewhere. Detroit can learn from both the successes and failures of other projects. The future is out there for the taking. No better time than now to go get it.

The Detroit-Berlin Connection is a 501(c)(3) non-profit organization. Members of the local board include Angie Linder, Amber Krumm, Mark Sanford, Walter Wasacz and John Collins, Cornelius Harris and Mike Banks of Underground Resistance.

The Detroit I Love Heart Shirt